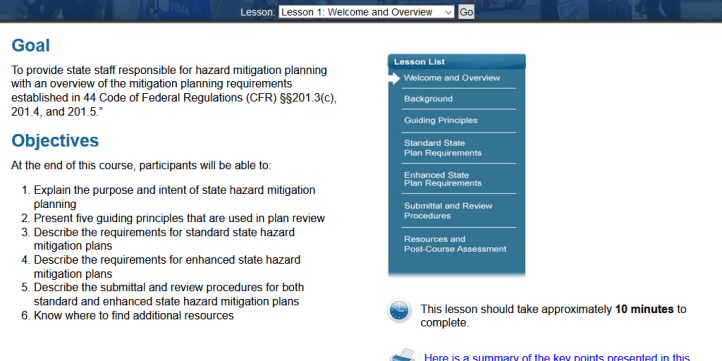 This course provides state officials an opportunity to understand the policies and procedures for updating State Hazard Mitigation Plans (as outlined in the 2015 State Plan Review Guide), and effectively use the planning process to advance mitigation.

A requirement of the state plan is to identify current and potential sources of funding to implement mitigation actions and activities. Which of the following funding sources is NOT a FEMA mitigation funding source?
A. Pre-Disaster Mitigation
B. Flood Mitigation Assistance
C. Watershed and Flood Prevention Operations Program
D. Hazard Mitigation Grant Program

Plan integration is one of the major requirements of gaining an enhanced state status. Which of the following is NOT a factor in determining the level of state plan integration?
A. Continued coordination and exchange between plan stakeholders
B. Demonstrate a history of integrating others that have shared risk reduction objectives
C. Embed hazard mitigation in other state planning, decision making, and development
D. Enable other agencies to inform the mitigation strategy

FEMA classifies the review of state plans into three categories. Which of the following is NOT an official designation?
A. Approval Pending Adoption (APA)
B. Requires Revisions
C. Approved with Conditions (AC)
D. Approved

An enhanced state is required to submit complete, accurate and timely quarterly reports and financial reports for HMA projects. Which of the following would NOT be considered part of the state’s requirement under Element E8 of the State Mitigation Plan Review Guide?
A. State must consistently comply with Financial Management Standard requirements
B. All Federal financial reports and Standard Form 425s are on time and accurate
C. Financial reports are submitted and documented during scheduled FEMA visits to the state
D. All progress reports must be complete and on time

Which of the following is NOT characteristic of an enhanced state/plan under 44 CFR §201.5?
A. The state has developed a comprehensive mitigation program
B. An approved enhanced plan entitles the state to receive increased funds under the Hazard Mitigation Grant Program
C. State enhanced plans have a ten year performance period
D. The state is capable of managing increased funding to achieve its mitigation goals

Which of the following is NOT a hazard mitigation action category?
A. Structure and infrastructure
B. Plans and Regulations
C. Natural Systems
D. Public Assistance

The State Mitigation Plan Review Guide is FEMA’s official interpretation of 44 CFR §§201.3, 201.4, and 201.5 and provides a standard operating procedure for the review of state hazard mitigation plans. Which one of the following is NOT addressed in the guide?
A. Enhanced State Plan Requirements: Outlines the elements that are required to be addressed in an enhanced standard state plan, including state mitigation capabilities and HMA grant management performance
B. Introduction: Purpose, guiding principles, organization
C. Mitigation Planning Responsibilities: FEMA and State responsibilities
D. Maintenance and Monitoring: Outlines the milestones of a 5 year plan for the state to monitor the progress of the plan after it is adopted and approved by FEMA

Element S1 of the state mitigation plan review guide asks “Does the plan describe the planning process used to develop the plan”? Which of the following would not be considered in documenting the planning process?
A. Plan schedule or timeframe
B. Agencies and stakeholders involved
C. FEMA regional coordination efforts
D. How the plan was prepared