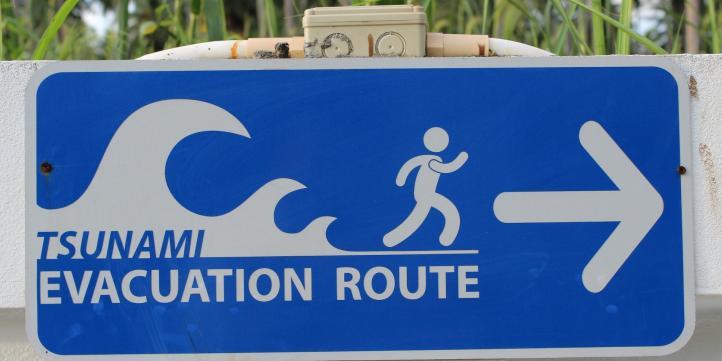 Answer key containing correct FEMA IS 326 answers to the independent study course Community Tsunami Preparedness. This course uses information found on the meted website and is composed of a large number of questions. You’ll learn about how to prepare your community for tsunami, including basic tsunami science, hazards that can be produced and a multi-tude of risks. Check out some of the example questions below!You may also be interested in our FEMA IS 271 Answer Key, FEMA IS 321 Answer Key, or FEMA IS 324 Answer Key.

Note: This course is on a non-federal government website operated by the Cooperative Program for Operational Meteorology, Education, and Training (COMET).

This module is designed to help emergency managers prepare their communities for tsunamis. Lessons include basic tsunami science, hazards produced by tsunamis, regional U.S. tsunami risks, the tsunami warning system, the importance of public education activities, and how to craft good emergency messages and develop tsunami response plans. Additional content provides video interviews of lessons learned by public officials in Crescent City, CA after the March 11, 2011 tsunami that originated in Japan. The module also contains links to extensive Reference and Resources sections. The latter includes tsunami PowerPoint presentations for each major U.S. region (Atlantic Coast, Gulf Coast, West Coast, Hawaii and Pacific Islands, Alaska, and Caribbean) that can be downloaded and customized for a particular location or need.

The cancellation of a Tsunami Warning means:
A. The earthquake probably occurred on land rather than under the ocean
B. The area is now under a Tsunami Watch
C. The Director of the Tsunami Warning Center has issued the All-Clear
D. Widespread inundation is no longer expected, but the emergency manager should consider local conditions before issuing the All-Clear

If the Tsunami Warning Center issues a Tsunami Advisory, should the emergency manager close beaches and evacuate harbors?
A. No, because an Advisory means an earthquake has occurred but a tsunami has not been generated.
B. Yes, because currents and waves can be dangerous

Tsunami waves often flow inland for several minutes, resulting in flooding that continues longer than that caused by storm surge.
A. True
B. False

A tsunami wave that is 2 feet (0.6 meters) is considered minor, so beaches, oceans, and harbors will be safe for the public.
A. True
B. False

In the event of a near-field tsunami, it is generally recommended that the public evacuate immediately using their cars or mass transportation.
A. True
B. False

An Information Statement issued by the Tsunami Warning Centers:
A. Alerts people that an earthquake has occurred but sea level data has not yet confirmed whether a tsunami has happened
B. Is issued when an earthquake has occurred but a destructive tsunami is not expected
C. Precedes a Tsunami Watch, Warning, or Advisory message
D. Indicates that a tsunami has been generated but is not expected to cause damage

The energy of tsunami waves is distributed throughout the water column, while that of wind waves is only in the top few hundred feet (hundred meters) of the ocean.
A. True
B. False

While the Caribbean is at risk from tsunamis due to earthquakes in the seismically active zones, submarine landslides are unlikely to occur.
A. True
B. False

Hawaii and other areas in the Pacific have a high to very high risk of tsunamis because of the relatively large number of earthquakes and volcanoes in the area.
A. True
B. False

In a near-field tsunami, emergency responders should assemble in the inundation zone immediately so they can direct the evacuation.
A. True
B. False

If a community has tsunami warning sirens, other communication methods will not be necessary.
A. True
B. False

If a teletsunami is coming in about 4 hours, would an emergency manager recommend that boat owners leave the harbor?
A. Yes, as long as boats can get out safely to deep water
B. No, boats are safer in the harbor than out in the open ocean

A tsunami is:
A. A rapid increase in water level due to extremely high tides combined with heavy precipitation
B. A series of waves in which the largest one may come after the first wave
C. A single wave that arrives at the beach traveling at the speed of a jet plane
D. A huge curling wave that can only be surfed by experts

The U.S. East Coast:
A. Will not have tsunamis unless they are caused by landslides or volcanoes
B. Has no history or geological evidence of past tsunamis
C. Is safe from tsunamis because it is not in a seismically active zone
D. Could experience tsunamis from distant sources

Earthquakes off the Alaskan coast cannot trigger teletsunamis (distant-source tsunamis) because of the shape of the Gulf of Alaska.
A. True
B. False

If water at the coast is behaving abnormally or a strong earthquake has occurred locally, the first thing an emergency manager should do is:
A. Evacuate the beaches
B. Send boats to deeper water
C. Call the Tsunami Warning Center to ask if a tsunami has been generated
D. Be on alert for an official Tsunami Warning Center message

Tsunami models run at the Tsunami Warning Centers help predict wave amplitudes and when the waves might arrive at different locations.
A. True
B. False

Communities that experience a damaging tsunami should expect to address problems related to post-traumatic stress disorder.
A. True
B. False

Tsunamis and wind waves differ, in part, in that the time between two tsunami waves can be many minutes or hours, while wind waves are usually only several seconds apart
A. True
B. False

Once the first tsunami wave comes ashore, you can expect subsequent waves to be the same size or smaller.
A. True
B. False

In addition to earthquakes, tsunamis can be caused by:
A. Climate change
B. Submarine landslides
C. High tides
D. Strong winds

During a disaster people may not react immediately to a tsunami warning until they have confirmation from others that they should do so.
A. True
B. False

Tsunami forecasts may not be 100% accurate due mainly to a lack of data, especially soon after an event. This means an emergency manager should:
A. Expect waves that are at least the forecast height and take appropriate precautions
B. Not take action until tide gages register increased activity
C. Plan for waves with heights half of what is forecast
D. Be on alert but wait until the Tsunami Warning Center sends a confirmation message

The Tsunami Ready Program
A. Recognizes communities that follow certain guidelines to improve tsunami safety and awareness
B. Is a PowerPoint presentation emergency managers can use to educate citizens
C. Helps communities build seawalls to prevent tsunami inundation
D. Is the name given to the overall warning system managed by the Tsunami Warning Centers

A Tsunami Response Plan should include training and education activities, as well as disaster management tactics.
A. True
B. False

Strong earthquakes cause most tsunamis because they:
A. Displace more sea floor, which moves more water
B. Shake the water more violently, causing larger waves

Which event would NOT be a sign that a tsunami was about to occur:
A. A rainstorm lasted for an unusually long time
B. The water looked unusually turbulent and you heard a roaring noise
C. Large areas of the seabed were exposed
D. Water levels rose suddenly

If a strong earthquake occurs, it is unnecessary to leave the beach until a tsunami is seen coming because most people can outrun the waves.
A. True
B. False

Tsunamis are most often caused by:
A. Undersea volcanoes
B. Glaciers calving
C. Land-based earthquakes land that are magnitude 7 or higher
D. Strong earthquakes that occur under the ocean

Early in a potential tsunami event, the Tsunami Warning Centers use pre-computed model runs to forecast tsunami wave heights based on hypothetical earthquakes.
A. True
B. False

The one thing not usually covered in a Tsunami Response Plan is:
A. Procedures for documenting disaster costs
B. Training procedures
C. How to call in staff in an emergency
D. Future mitigation plans, such as building code changes