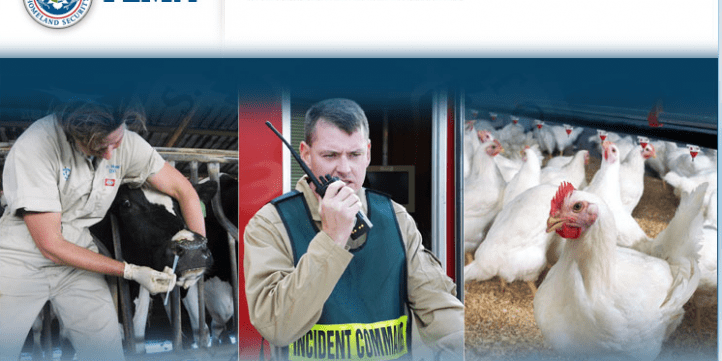 Answer key containing FEMA IS 111.A Answers to the course Livestock in Disasters. This course is intended to combine the knowledge of livestock producers and emergency managers to mitigate the impact of disasters an live stock and animal agriculture. You will learn the common causes and consequences of typical disasters. Emergency managers will be able to communicate effectively with farmers about disasters affecting livestock. Check out our  FEMA IS 10 Answer Key, FEMA IS 11 Answer Key, or FEMA IS 101 Answer Key.

This course combines the knowledge of livestock producers and emergency managers to present a unified approach to mitigate the impact of disasters on animal agriculture.

The objectives of this course are to learn understand issues that arise when disasters affect livestock, determine a farm’s susceptibility to hazards, and identify actions to reduce economic losses and human and animal suffering in disasters.

From IS-111.A: Livestock in Disasters

FEMA IS 111.A Example Questions

Which of the following statements is correct regarding droughts?
A. Proper watershed, forest, and rangeland management is effective mitigation against droughts.
B. Spreading livestock operations out among several states is effective mitigation against weather-related disasters.
C. Reducing personal water usage helps reduce the impact of droughts.
D. All of the above.

Which of the following statements is correct about the behavior of landslides?
A. Damage from mudflows cannot be covered by insurance.
B. Planting deep-rooted ground cover is an effective mitigation measure against landslides.
C. Accumulation of water and bulging ground at the bottom of slopes are normal occurrences after heavy rains.
D. Landslides rarely affect agricultural property.

Which of the following statements accurately describes disaster assistance?
A. In large-scale disasters, the Director of Emergency Management is responsible for declaring a disaster.
B. State disaster declarations can only be made when more than one community is affected.
C. Volunteer organizations are the only source of disaster assistance at the local level.
D. For a State to qualify for Federal disaster assistance from FEMA, it is best if the State has laws that are consistent with those of Federal emergency management law.

Which of the following statements correctly describe liability issues in disasters?
A. The owner of an escaped animal may be held liable for damages his/her animal creates.
B. The local Department of Animal Control is the legal entity in most communities to deal with abandoned and lost animals.
C. In most States, Good Samaritan Laws do not directly apply to the care of animals.
D. All of the above.

Which of the following statements characterizes effective disaster preparedness plans?
A. Local plans allow communities to integrate with state and federal response to disasters.
B. Emergency Operations Plans work best within organizational structures responsive to non-emergency duties that are similar to the duties needed in disasters.
C. One of the purposes of an Emergency Operations Plan is to provide an overview of the community’s jurisdiction.
D. All of the above.

Which of the following statements describe effective operations in disasters?
A. The use of an out-of-area contact can be an effective way to coordinate in disasters.
B. The Incident Command System provides a consistent method to respond to all types of emergencies.
C. Each responding agency and group should operate independently and separately from the others, in order to cover more ground.
D. All of the above.

Which of the following statements will NOT reduce risks arising from wildfires?
A. Having fire tools handy at your home and in your barn: a ladder, garden hoses, fire extinguishers, gas-operated water pumps, shovels, rakes, and buckets.
B. Practice a fire drill every month throughout the fire season.
C. Designating access to barns and water for firefighters.
D. Allowing people to smoke in barns.

Which of the following statements describes appropriate procedures for dealing with animal health/disease?
A. Under emergency conditions, animal health services should always be provided by the person who is closest to the scene.
B. Veterinarians don’t know much about the clinical aspects of food animals exposed to hazardous chemicals.
C. Only animals intended for human consumption require an official health permit signed by a veterinarian when moved across State lines.
D. All suspect findings of Foreign Animal Diseases have to be reported to State or Federal veterinarians.

FEMA IS 010.A Animals in Disasters: Awareness and Preparedness Answer Key

FEMA IS 011.A Animals in Disasters: Community Planning Study Guide